AC/DC is a rock band that was originated in Australia. The history of the band AC/DC begins with brothers, George Young and Malcolm Young who made up the top of AC/DC. In 1973, the group “AC/DC” made its debut from an eponymous album which had been released by Albert Productions. Initially, Mr. Harry Vanda and Mr George Young were involved with this album as producers.

In 1974, Bon Scott became the lead singer of AC/DC succeeding Dave Evans in April after he joined to replace the former vocalist Ronald Belford “Bon” Scott in February. The first album in which Bon Scott appear ws called High Voltage which was produced by Vanda Young in Australia in 1975 at Albert Productions.

In February 1980, Bon Scott died and he was found dead in a car outside of his home located at the Oorala Avenue in East Perth, Western Australia after consuming too much alcohol and having been under the influence of heroin. It is claimed that AC/DC has never truly recovered from losing their young lead singer on February 19, 1980.

AC/DC’s long career began with albums such as Dirty Deeds Done Dirt Cheap (album), Let There Be Rock (album) which reached number 4 in Britain and Back in Black (album) which also topped the album charts. The band continued to produce music until today; however, they did lose their frontman due to an unfortunate fate. This article presents top ten secrets of AC/DC band. 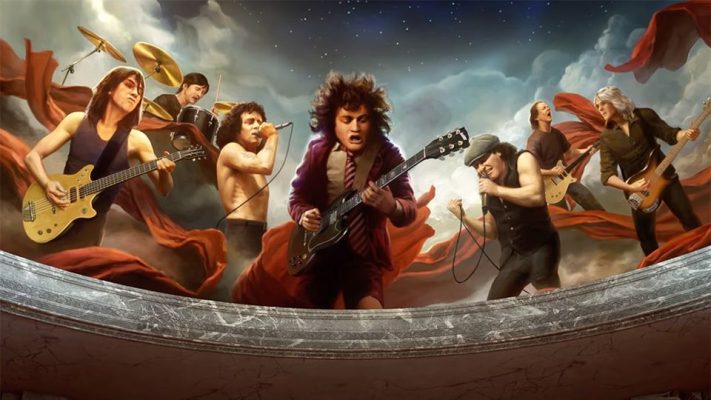 10. Bon Scott was not the first choice to be the lead singer of AC/DC

Besides Bon Scott, other singers who were in consideration to become the lead singer of AC/DC included Mark Evans (who had also played bass for AC/DC) after Dave Evans’s departure. Another name is Terry Juric a high school friend of Malcolm Young. Even at one point, Bon Scott himself turned down a chance to join AC/DC in 1974 in favor to front his own band called Fraternity. However, when Fraternity failed to achieve much success and broke up in October 1974, he reconsidered and joined AC/DC by early 1975 as their new vocalist where they traveled to England that same year.

In 1980, Malcolm Young was diagnosed with epilepsy. To ease his symptoms, doctors advised him to stay away from drinking alcohol. Although his condition was not as bad he had epileptic seizures during AC/DC’s Blow Up Your Video world tour in 1988. Eventually, the band had to cancel several gigs while they took a five-week break for him to recover. Unfortunately, Malcolm Young began experiencing difficulties again later on and this time it involved more serious health concerns that contributed greatly to his retirement in 2014.

8. Angus Young was quite timid when he first started playing guitar

Young Angus didn’t have much interest in music until one day he brought home the album of The Easybeats which contained the song “Good Times”. Not long after, his older brother Malcolm showed him some chords and rhythms and he was motivated to start playing guitar. Despite what people think about Angus’ stage antics, they may not know that he is often afraid of heights. He also has a fear of flying.

7. AC/DC was banned from Cleveland

In April 1977, AC/DC had a gig in the Cleveland Agora club which led to their ban from playing there. The reason behind this was a rather vulgar hand gesture Angus Young made during a performance at the Agora Ballroom which outraged its owner and subsequently got them banned for life from that particular venue. However, it appears that AC/DC has been able to play there again, but only recently as of 2013.

6. In late 1960s, members of AC/DC were also members of The Velvet Underground

Malcolm and Angus’ older brother George Young played bass guitar for a short time with The Velvet Underground before he left them not long after he joined so that he could return home to Australia. The two brothers would later join his band called Marcus Hook Roll Band which also included singer Terry Wilkins who was drafted to replace Bon Scott after he joined AC/DC in December 1974.

5. There are only five original members of AC/DC

The number of people who have been in the line-up of AC/DC throughout the years has remained quite low, with just five names that have always been part of this rock and roll band; Malcolm Young, Angus Young, Phil Rudd (who replaced Mark Evans on drums), Cliff Williams (who replaced Larry van Kriedt on bass) and Brian Johnson (who replaced Dave Evans on vocals). At one point, their nephew Stevie Young was also a member but more recently, he was replaced by his namesake nephew, Stevie Young.

4. There is only one original member of AC/DC who remains alive

Although Angus and Malcolm Young are the only two original members who have remained part of AC/DC since the 1970s and early 1980s respectively, they started playing together as far back as 1964 when their brother George formed a band with them called The Velvet Underground which also included singer Lou Reed (who later founded The Velvet Underground). It should be mentioned that Phil Rudd was not yet in the picture during those years because he joined AC/DC in 1977 after Mark Evans’ departure from the group.

3. Paul McCartney once recorded at the same studio as AC/DC

In 1979, Paul McCartney invited Bon Scott to record some vocals on his album “Back to the Egg” at Abbey Road studios. At that time, AC/DC had just finished recording their highly successful album Highway To Hell which they were promoting around Europe. McCartney is a big fan of the band and has even joked about them being more popular than him during an interview with Angus Young in 1986.

One of Malcolm Young’ s trademarks is always plugging his guitar into the amplifier with its cables facing the wrong way, with the input cable going into the output jack instead of vice versa which he claims protects him against electrical shocks while preventing any possible damage to his equipment as well. It’s also believed that this has been a safety measure for him ever since he was electrocuted onstage in the early 1970s.

1. Bon Scott served time in jail after an altercation with an older man

Bon Scott himself became quite popular and admired by many people and fans of his band throughout his career, but despite his fame and success, he still had to deal with the problems that every other young Australian had to face during the 1970s. He found employment at a brick kiln where one of his coworkers was fond of telling him what to do all day long until one day when they got into another argument which led to him being charged with assault and robbery after he hit the older man over the head with a whiskey bottle. Although this incident happened while Scott was still in AC/DC, he was never punished or fired by the group’s management for this crime.