Christmas is a time for fun, family and of course, Santa jokes. Here are our favorites to get you in the festive spirit! 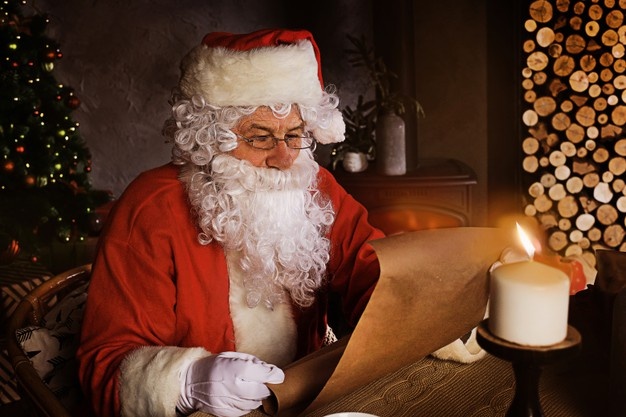 1. Why doesn’t Santa have any children? Because he only comes once a year!

2. What do you call someone who hangs around with Santa? A Claus!

3. How does SANTA know who’s been naughty and nice? He reads their Christmas list!

4. How does Rudolph know which way to go? He follows Santa’s nose!

5. Why did Santa go to the doctor? Because he had a ho-ho-ho-itus!

6. What’s really going on when Santa visits your house at night? Mrs. Claus has a cold!

7. What do you call a man who hangs around with Santa? Kris Kringle!

8. How do Christmas carolers greet each other? Ho ho ho, hey hey hey!

9. Did you hear about the kid whose mother had him wear his gloves all year round because he was born with no hands and feet? He wanted to make sure Santa had a pair when he came on Christmas Eve!

10. Why is Santa’s sack so big? Because he only comes once a year, and that’s just not enough time to carry everything he needs for all the good little girls and boys in the world!

11. How do you catch Santa? Hide in the bushes and make a noise like a reindeer!

12. What’s the best way to keep Santa from coming down your chimney? Put a brick on the flue!

13. Why did Rudolph go to medical school? To learn how to hoof it!

14. How does Santa know who is naughty and nice? He reads their emails!

15. What do you call someone who hangs out with elves all day? A pixie!

16. Who delivers presents to dogs on Christmas Eve? Santa Paws!

17. Why was Frosty such a popular snowman? Because every time someone knocked his hat off, he’d say, “Don’t you know who I am?”

18. What do elves learn at school? The elf-abet!

19. How does Santa sort presents into piles for boys and girls? He uses his Frosty the Snowwoman!

20. Why is Santa Claus like a barometer? When he’s coming, the weather’s changing!

21. How do you keep an elf busy until Christmas morning? Put him in a round room and tell him to sit in the corner!

22. Why was Santa so jolly all year long? Because he knew where all the naughty girls & boys lived!

23. What happens when you stand on one side of the North Pole? You get cold on the other side!

24. How does Santa know when kids are sleeping? He uses his “Santa-corder”!

25. What do elves learn in school? The elf-abet!

26. If Christmas is such a hot time, how come Santa’s coat is so thick and fuzzy? He has “elf lining”!

27. Why was Santa in such a bad mood all year long? It wasn’t because of Rudolph – it was that darn fog he had to deal with everywhere he went!

28. Where did Frosty the Snowman go when summer came around? To the North Pole! (He got snowed out!)

29. How does Santa communicate with his reindeer during poor weather conditions? He uses a special reindeer phone!

30. What did the elf say to the snowman? “Did you know that Santa’s coming tonight?”

31. Why was Santa so exhausted at the end of his trip around the world? He’d been on a sleigh ride!

32. How does Santa keep track of who is naughty and nice? With his naughty-nice list!

33. What’s the best way to keep from getting coal in your stocking from Santa? Behave yourself all year long!

34. If Rudolph is the lead reindeer, why does he have a red nose? It’s because he’s been drinking out of the Red Nose Reindeer Flask!

35. What do you call a snowman with a six-pack? An abdominal snowman!

36. How does Santa know when he’s going to run into foggy conditions on his trip around the world? He uses a special Santa gauge!

37. What’s the best way to avoid getting lumps of coal in your stocking from Santa? Behave yourself all year long!

38. Why is Mrs. Claus so cross at Christmas time? Because her husband has been working so hard!

39. What did one snowman say to the other snowman? “I don’t know, but it smells like carrots!”

40. Why did the chicken go to see Santa Claus? To get some Christmas spirit!

41. How does Santa know how long to stay at each house? He uses a timer and lets it run out!

43. How does Santa keep track of who is naughty and nice? With his Naughty and Nice List, of course!

44. Why was the line so long at the mall on Christmas Eve? Because everyone was waiting to see Santa Claus!

45. Why doesn’t Rudolph go down chimneys anymore? Because he’s learned every time he tries, he gets stuck halfway down!

46. What do elves learn in school? The Elf-abet!

47. Can you name all eight reindeer that pull Santa’s sleigh? Don’t worry, they’re on the Reindeer List!

48. Why is Santa so jolly all year long? He knows where all the bad girls live!

49. When do reindeer fly best? In clear weather, of course!

50. What does Santa Claus like most about his wife? Her Christmas spirit and goodwill towards men (and elves)!